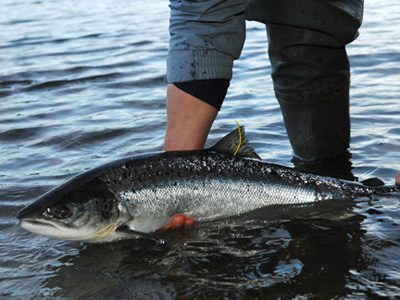 The river has remained fairly steady at a good fishable fly water height and has been mainly running clear. The Teviot rose a little last week bringing in some colour but generally, the fishing remains steady with fresh or sealiced fish being caught daily. Many fish are in the mid-teens 14–16lbs, with the largest reported fish so far being reported at 43” in length, caught from the Lees. The fish was a fresh sealiced fish caught on a gold bodied Willie Gunn; by Graham Whitty. Truly a fish of a lifetime – well done Graham!

The water temperature has remained steady being around 40° but generally between 38/40°.

Spinning started last week but although some beats have chosen to spin the remainder have opted to fish on the fly. As the conditions are favourable for the fly, successful patterns have been the gold bodied Willie Gunn and the all time classic; black & yellow. These have been fished on floating lines with tips owing to the water being fairly clear. Most fishers are opting for 15lb ultra green Maxima or, if it has risen a little and is carrying some colour, then 18lbs Chameleon Maxima. Most productive areas are Floors down to Coldstream, all in all, not a bad start to our 2017 season here on Tweedside.

It’s great to see fish being caught on a daily basis. The upside has been the quality of the fish. Without doubt; quality over quantity is reining forth. It is still very early in the Spring season but once we get going properly around mid-March, we will have a better idea as to how the season is looking. Last week we suffered cold easterly winds nearly all week, making the fishing somewhat challenging!

Two beats on the river now have their new huts fully operational for the 2017 season. The old Junction hut which was washed away in the folds of December 2015, has now been replaced with a smart new pavilion style hut whilst Dryburgh Upper, have rebuilt and relocated theirs. Thus making fishing on these beats that little bit more enjoyable and luxurious!

It is without doubt that Spring is on its way as we witness the young shoots of wild garlic, snow drops and crocuses which are now starting to come through.