The Otters’ Tale by Simon Cooper

From the publishers…
Otters hold an almost unique place in the animal kingdom of the British Isles, being one of the very few creatures that give birth once every two years. They are the most secretive yet also the most popular mammals – they are found in every county but are so rarely seen that they have been raised to mythical status.
In his lyrical account of the natural history of the otter, leading chalkstream conservationist Simon Cooper provides a unique insight into the life of these fascinating creatures.

“When I bought an abandoned water mill that straddles a small chalkstream in southern England, little did I know that I would come to share the mill with a family of wild otters.”
​ 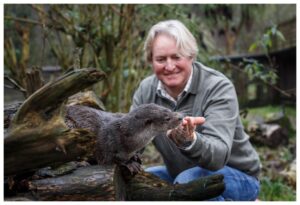 Simon Cooper gets up close with ‘Topaz’ at the New Forest Wildlife Park.Our review…
I have just finished reading The Otters’ Tale and have really enjoyed it I have to say. This is the tale of Kuschta the otter and her family and the landscape they share as their home with the author.
Simon Cooper is perhaps in a unique position to have written this book, living side-by-side as he does in a beautiful old mill house on an English chalk stream with an otter family sharing both the comfort of the mill workings as a place to rest, his grounds as part of their territory and using his beginners fly fishing pond as a very handy source of fat trout thank you very much.
What I found particularly interesting was how he has been able to blend his own in-depth observations of the otter family who are the stars of the book, with his research based on the work of otter experts both current and past, such as the diaries of the otter hunters of old. This has allowed the narrative to flow very naturally between observation, fact and to be able to fill*the gaps naturally in the story being told, thereby painting an incredibly lucid picture of the trials and tribulations of being an otter.
It’s not all snoozing in holts and catching fish as the tales of abandoned pups, short life expectancy and the modern dangers of cars and roads will attest. As for otters hunting rabbits – I had no idea and that is the beauty of this book, you will learn so much more than you thought you knew about this most enigmatic of creatures and our neighbour on the riverbanks and shorelines of Britain.
A solid thumbs up from me!
Paul Sharman.
RRP:*£16.99
Published by William Collins Books