We were recently introduced to the fine work of sculptor Paul Dady via his magnificent salmon cast in bronze featured in our main photo. After an early career spent working with his wife in the fine replication of fossil material for museum display, research, and education at their company Palaeo Replicas, Paul returned to his love for fish as an angler and started crafting replicas in clay and then bronze. The rest is history as they say. Paul has kindly shared with us a timeline with photographs for the creation of this latest salmon masterpiece which we hope you will find as interesting as we have.
Paul Sharman, Editor-in-Chief, Fish and Fly Ltd.

Creating A Salmon By Hand

“Locked into a world of perpetual motion for all time the Salmon is compelled to perpetually adjust and readjust to the ceaseless demands of the passing water. Perhaps for the Artist the challenge is not merely to capture a physical likeness of the salmon itself, but moreover to capture a moment in ‘its’ time?“ 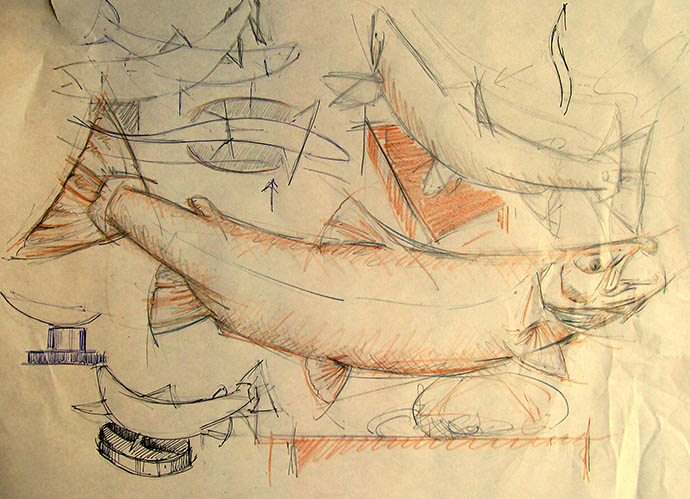 Following exploratory drawings, in effect little more than a series of sketches highlighting the lines that best exemplify the subject, a polyurethane manikin is produced as a foundation upon which to apply the clay. If the piece is large the use of a manikin adds structural stability to the clay and by virtue of its bulk/volume negates excessive layers of clay thus reducing weight and drying times. 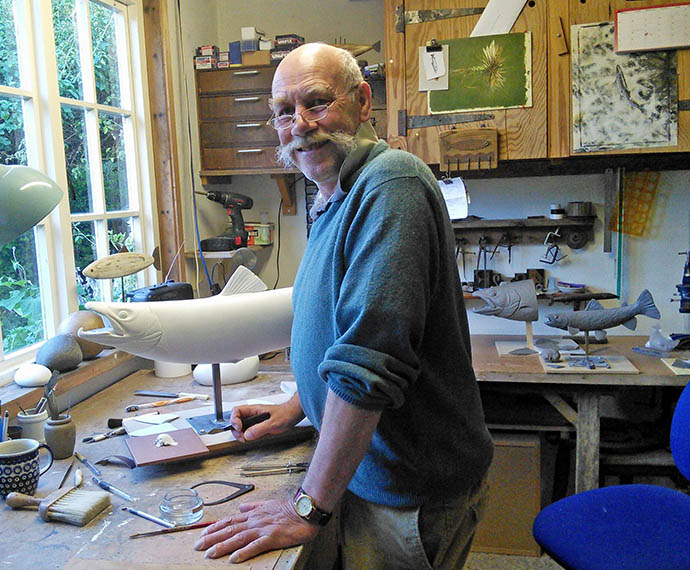 So as to avoid ‘internal’ shrinkage and any subsequent possibility of cracking at a later stage the clay is initially applied in layers each bonded to the previous and allowed to dry before a further layer is applied. The layering is repeated until the desired size and basic form of the piece is achieved at which point the broad detail of the piece may be marked out and roughly applied. The head and fins of the piece may be worked separately and adjoined at the finishing stage. 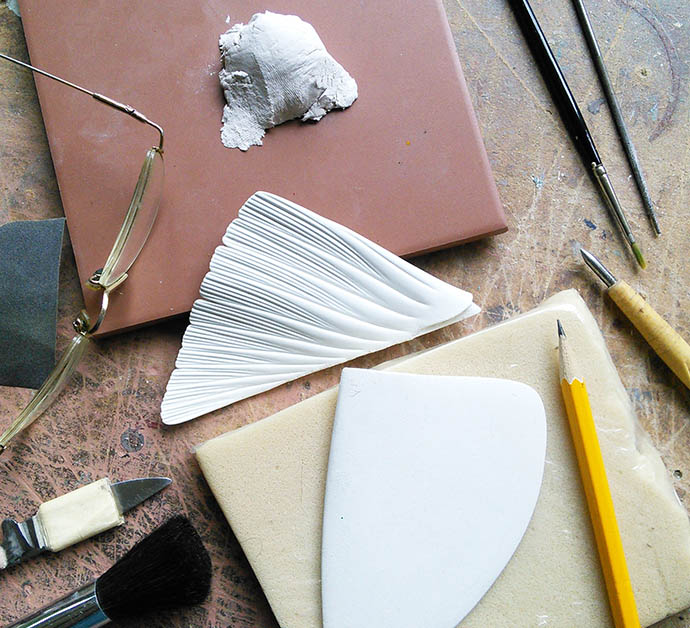 The refining of the detail is a repeated process of application and reduction. Ever finer pieces of wet clay being applied and carefully sculpted into position which when hardened, hastened by a hair dryer, may then be ‘tooled’ and ultimately sanded to the desired finish. 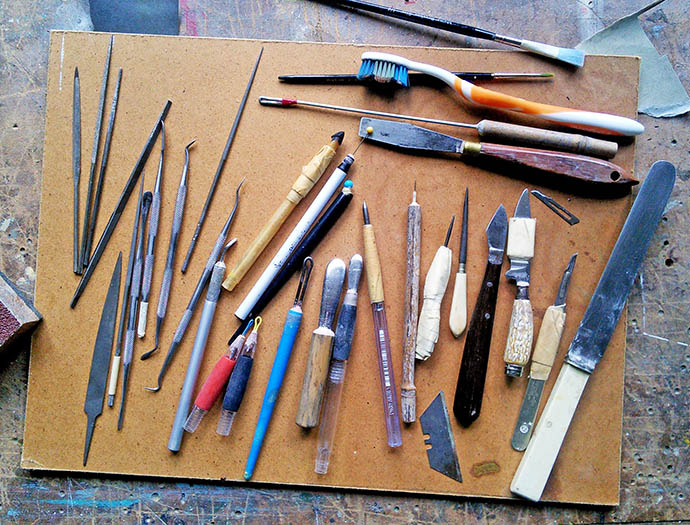 Insofar as ‘best tools for?…’, as ever, despite the plethora of those available commercially, indeed ‘something for every eventuality’ – a motley collection of bent and twisted self styled ‘implements’ are more often than not those most favoured. 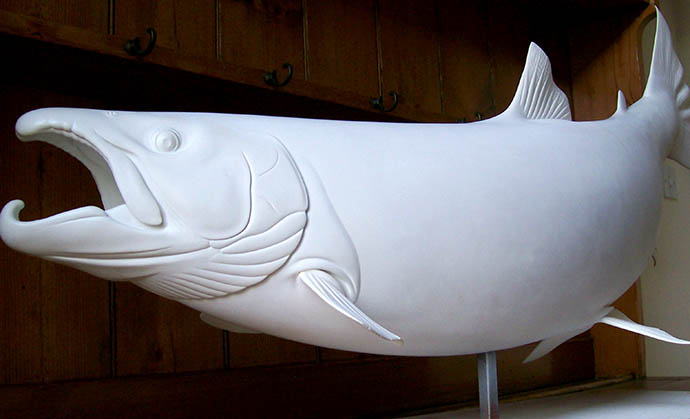 Having worked the detail to a satisfactory state the clay is then ready for finishing. In this instance repeated layers of acrylic primer are applied and painstakingly sanded back with ever finer abrasives until, in this instance, a ‘polished’ effect is achieved. 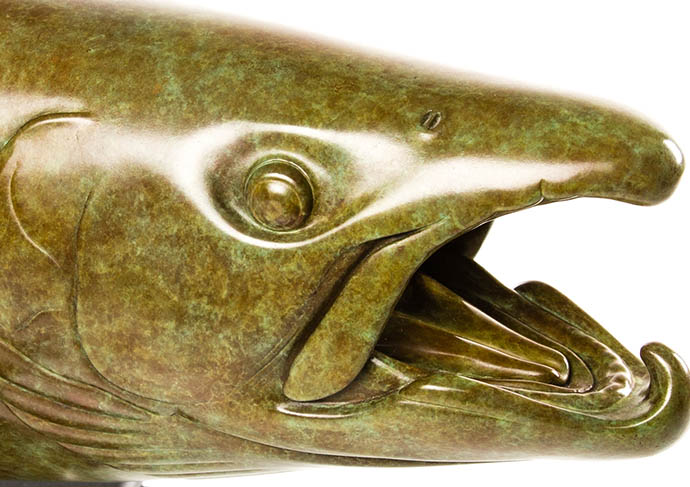 In the instance of the Atlantic Salmon, of all sculptural mediums possibly finely foundered bronze, itself classical and enduring, serves best to exemplify the iconic qualities of the subject itself. 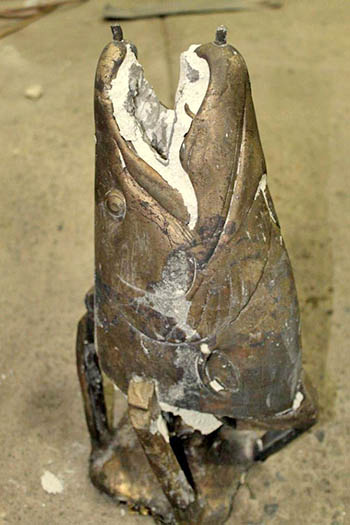 The earliest evidences of the founding of bronze using the Lost Wax process are to be found in and around the middle east dating from approximately 4000 BC. Undoubtedly other cultures as far afield as what is now Pakistan and China were also ‘experimenting’ upon similar lines during this period and whilst the subsequent 6000 years or so have seen dramatic advancements in terms of both materials and technology in essence the process, one of art and craft by equal measure, remains fundamentally unchanged…. 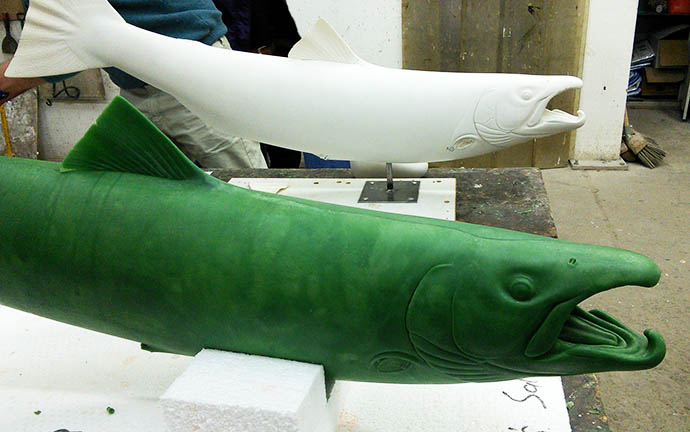 From the artist’s original sculpture a mould is carefully taken from which an exact replica of the piece is produced in wax. At this point the Artist may sign or mark the piece to which the foundry ‘stamp’ and an edition number (if limited) is usually added. Depending upon the complexity of the original the wax may then be reduced to sections for ease of casting at a later point. Venting channels known as Sprues are added to each section so as, at the point of investment, to allow the free flow of molten bronze into the mould and the venting of gasses. These may be multiple depending upon the complexity of the piece to be cast. 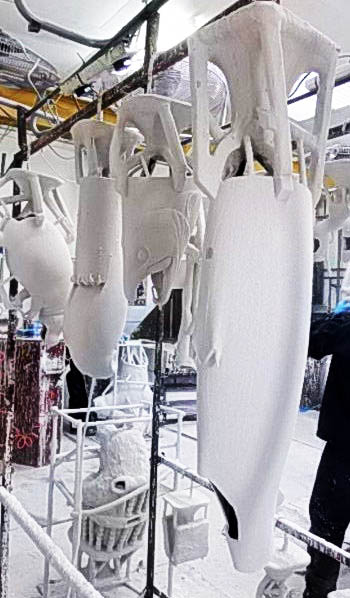 The wax components are then repeatedly dipped into a liquid ceramic, each coating drying before the next is applied. When the required thickness is achieved this is then left to harden at which point the ceramic is heated so as to melt the wax which is drained from the component leaving in effect a ceramic shell or negative into which the molten bronze may be poured (invested). 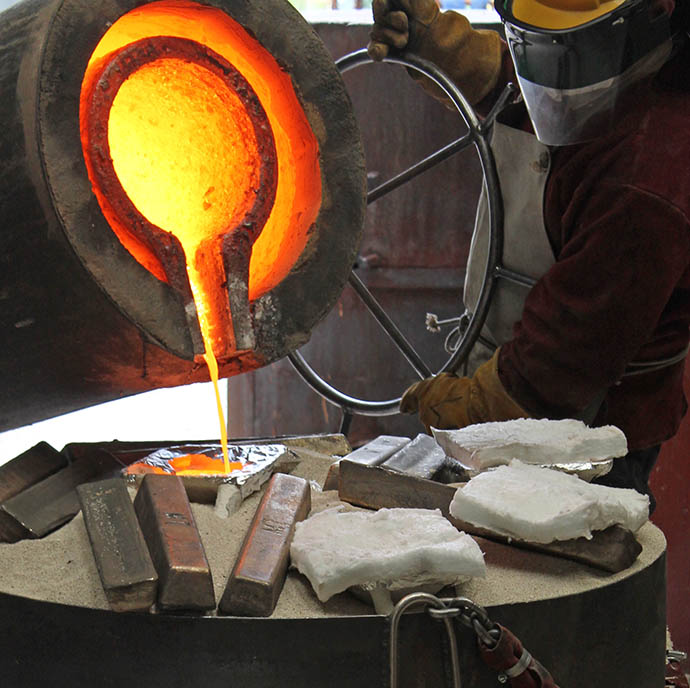 Typically for investment bronze ingots are heated to 2,200 degrees Fahrenheit. The ‘shell’ into which the bronze is to be poured itself is kiln heated to 1,500 F so as to aid the flow of the bronze into the detail of the voids. 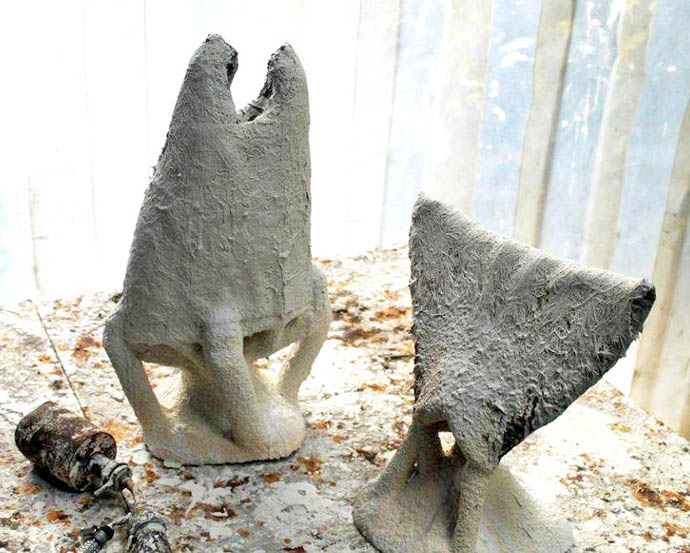 When cooled the ceramic is broken away and the remnants painstakingly teased from the detail of the work to reveal, now in bronze, the desired section of the sculpture. 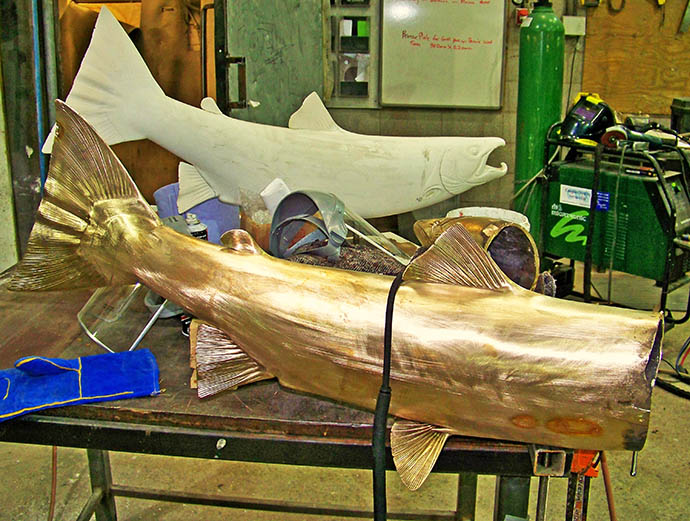 Once the sprues (now also cast in bronze) have been carefully removed the sculpture may now be reassembled. A bronze weld is used in the fixing of the components and locking pins may be introduced for reinforcement at strategic points. All flashings and weld points will need to be made perfect or ‘chased’ and any blemishes in the investment made good. Finally, prior to the application of a patina, the surface of the piece will be worked with ever finer abrasives until the appropriate original sheen or finish is achieved. 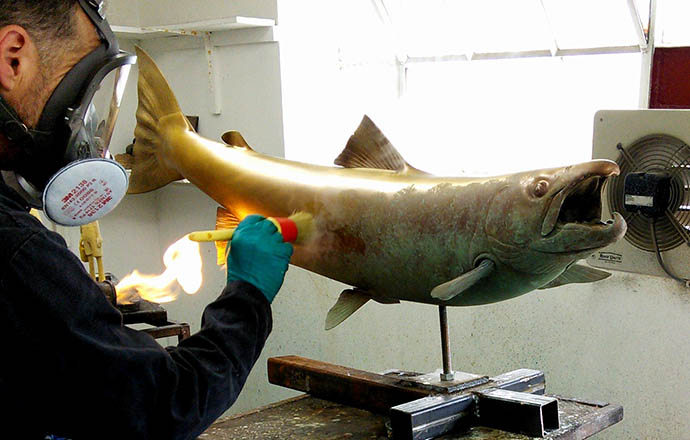 Being a copper rich alloy, depending upon the prevailing environment bronze will oxidise this most commonly manifesting as a ‘verdigre’ type lustre. The process of oxidation may be accelerated and further manipulated in terms of colour and patterning by the skillful application of various formulations of acid and varying degrees of heat. Once the desired effect is achieved a finishing wax is applied and the piece burnished thus sealing, deepening and enriching the effect. 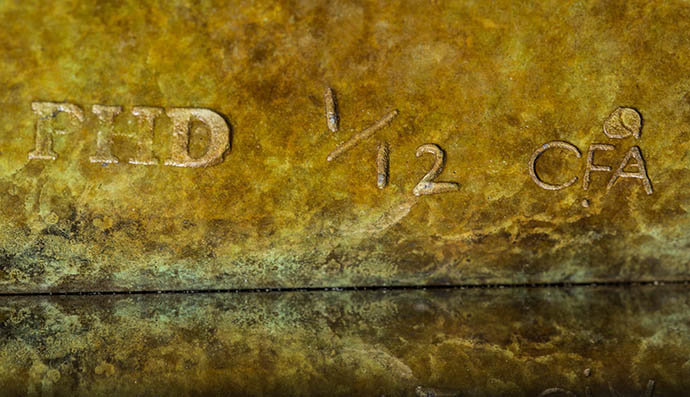 The Salmon was foundered by Castle Fine Arts Foundry, Llanrhaeadr ym Mochnant, Wales. The artist wishes to acknowledge those concerned not least for their kindness and cooperation but also for their professionalism, skill and exceptional attention to detail without which this project could not have been finished to the level worthy of that most noble of fish – the Atlantic Salmon. 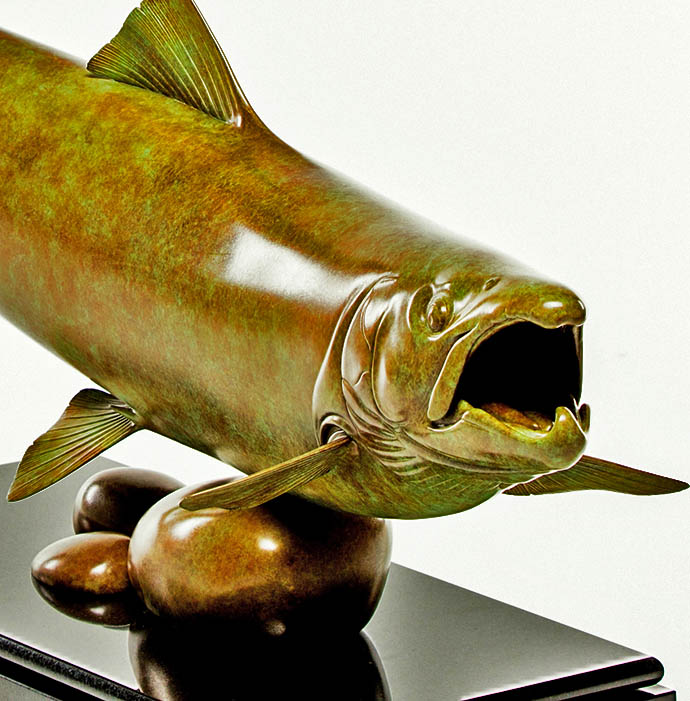 The finished sculpture on its plinth.

Our thanks to Paul Dady for helping us put together this article about his work. Please do have a look at www.pauldady.com for his grayling and trout sculptures too.

The vent would suggest that it's a kelt!