Two giant new fish tanks have been delivered to the hatchery at the Environment Agency’s Kielder Salmon Centre.
The fibre glass tanks, which measure 9 metres across by 1.5 metres deep, weigh more than 500kg and can hold 50,000 litres of water each, will be the final stop for thousands of young salmon before they are released into tributaries of the River Tyne.
The old tanks had been in use since the hatchery opened in 1980, and were at risk of failing and flooding the nearby office and visitor centre.
[h=3]Young salmon will be ‘stronger and fitter’[/h]Richard Bond, manager of Kielder Salmon Centre, said:
“It was a relief to see the new tanks arrive safely, and our young salmon will be stronger and fitter in future because of the improved conditions we can now provide.” 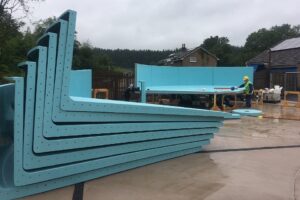 During the summer and autumn months up to 150,000 small fish aged between four to eight months will be stored in each tank.
There are only two manufacturers of tanks this size in the UK, so they had to be brought on a long road trip from Aberdeen down to the salmon centre.
Specialist fitters were given the job of installing the £200,000 tanks on to concrete bases, specially strengthened to support the eventual 128 tonne weight of the tanks when filled.
The new concrete slab was laid with space and water supplies for five smaller tanks which it’s hoped will be installed in future as the work of the hatchery expands.
Kielder Salmon Centre is run by the Environment Agency and is open to visitors every day from April to September from 10am until 4pm. Visitors can take a self-guided tour to discover some incredible facts about the wild salmon, endangered freshwater mussels which are also looked after at the hatchery, and other interesting species in their local environment.
You can find the details on their webpage here.

Good to see they are updating the hatchery for the future.

Sent from my SM-G930F using Tapatalk