I might sort my picture out at some point, so if anyone else wants to submit a better picture, post it at the end of the thread, send me a PM to let me know and I'll get it into the summary.


A good few entries there and some nice ideas personally I like the eyes, the eeeyyyess, thee eyyyyyessss

Sorry about the delay folks.

We are now in June, traditionally the start of the Sea Trout run on most systems and with Walleye's cracking Wear Sea Trout in the Pictures Thread, this seems especially appropriate.

This month our theme has been suggested by our very own Torrish.

Everyone has to tie the fly they would use for both Salmon and Sea Trout.

I'm not sure that there is any real reason for differences between the patterns we use for both Salmon and Sea Trout, but there are clear differences. Many of us have been happy with singles for our Sea Trout fishing while preferring doubles and trebles for Salmon, Waddington shanks are still very popular Sea Trout flies and a lot of patterns are designed more deliberately around shape and sillouette. Many successful Sea trout flies also are of much simpler construction than most of our favorite Salmon patterns.

Weather you tie the fly you'd use at the end of a long night session or the one you'd tie on after a good flood when both fish are running, there is lots of choice and I suspect everyone will have a different take on their favorite pattern


Changes to the TOTM Format:


1.The fly must have been tied for TOTM and should not have already appeared elsewhere on the forum or t'interweb. You can tie another versiion of one you have already posted but please don't just lift the photo from another thread to TOTM
2. - This year I would like anybody who has started tying flies in the last 12 months to highlight this on their first entry. It would be great to see a 'best newcomer' shout at the end of the year.
3. - The competition will run From Feb - December with entries from Feb - November. December will be a 'Tie of the Year' with a vote for the best fly from the 10 monthly competitions. In a superbowl / superleague style the winning fly in 'Tie Of The Year will earn 20 points. ooooooohhhh, aaaahhhhh.

You can tie the fly on any hook, shank (Waddington or articulated) or tube.

Integrity rules, let the voters decide but please don't push the rules or bang in a Silver Stoat or a Cascade.

The Nine Commandments:
1. The first rule of TOTM is that everyone is welcome.
2. The second rule of TOTM is that every day is a School day, try something new or unfamiliar, as well as the things you know you are good at.
3. The Third rule of TOTM is that variety is the spice of life, we'll try and do something different every month.
4. The tying competition has a different theme each month.
5. At the end of the month there will be a poll to vote the winner. The poll will run the entirety of the following month.
6. Points are awarded for simply entering, with additional points awarded for placing first, second and third.
7. Whichever participant has the most points at the end of the year wins the prize.
8. The competition will run from Feb - December 2018
9. The December competition will be a 'Tie Of The Year' event, where members will vote for the best of the winning flies from the 10 monthly competitions.

1. Each entry will be worth 4 points. You get points for simply entering. Looking at the 2017 table, there is only one reason I snuck in ahead of Jockiescott, I entered more competitions.
2. First place will be worth 10 points.
3. Second place will be worth 8 points.
4. Third place will be worth 7 points.
5. In the event of a tie for first, second, and/or third in number of votes, all tied participants get equivalent points.This means you can win the whole event, without ever winning a single month's competition simply by participating.


Again, the June 2018 theme is going to be: Salmon and Sea Trout

1. One entry per participant.
2. The Fly must have been tied specifically for TOTM, you can repeat previously posted patterns from here or elsewhere on the web but you need to tie a version specifically for TOTM and not just lift the picture from another location.
3. The fly must have been tied by you.
4. One photograph of a fly or flies following the theme. Entries with more than 1 photo will be immediately disqualified. ONE PHOTO ONLY.
5. More than one fly in the photograph is acceptable, they may not be identical (ie. one can be upon a tube and another upon a hook or one on a single hook and another on a double, etc.) but they must all be the same tying of the pattern.
Last edited: Jul 4, 2018

I'm only half a year late to the party but I could put in a strong end of year run!!! :lol:

I don't fish for trout much but it was one of these I got my last trout on at night. About 5 years ago.

I showed one of these on a double during the week but here is one on a single which I have been told is how the original was tied. With a red butt rather than halved body. 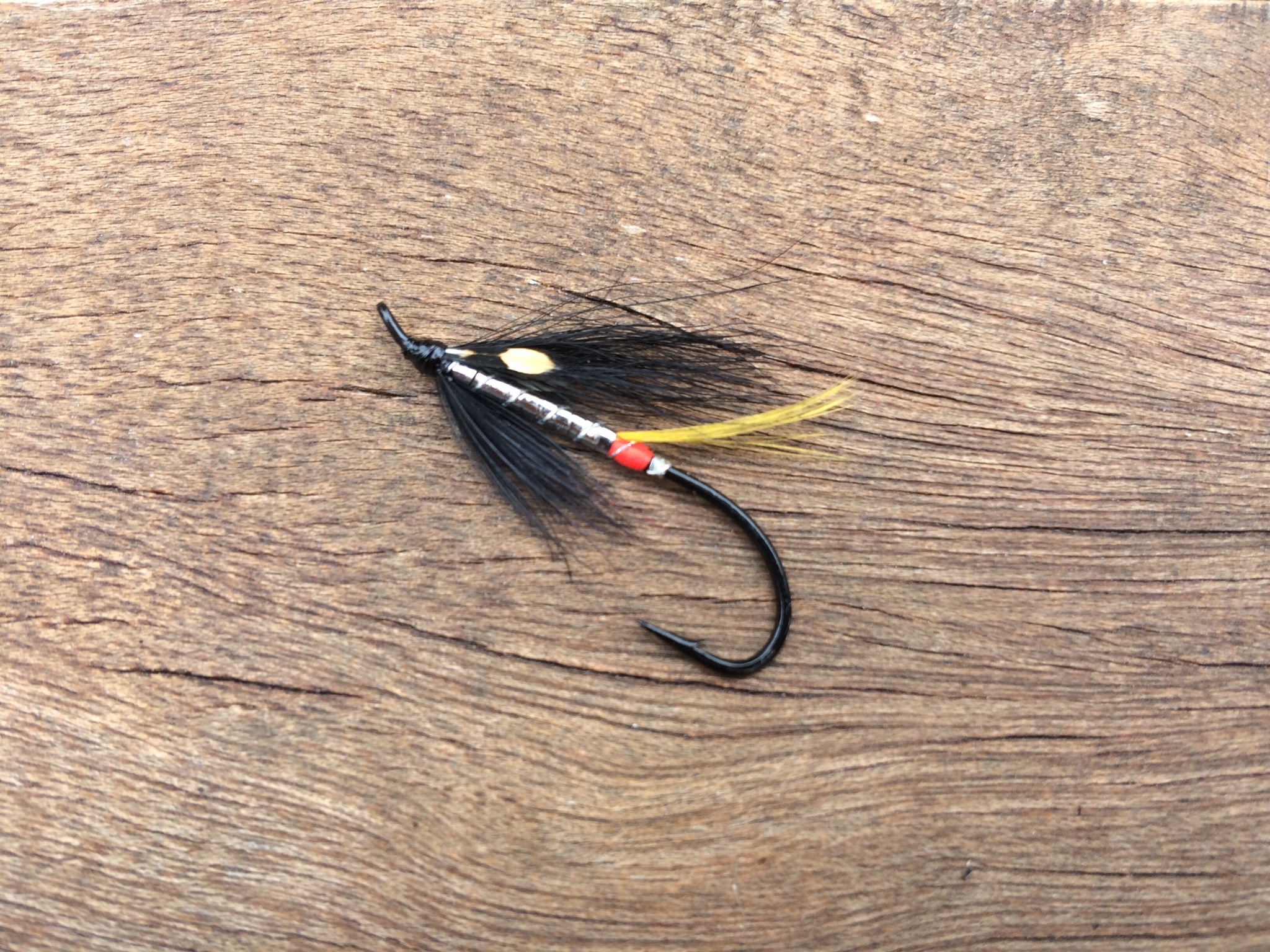 Can't remember when the last time I tied a feather-wing fly. Had to make some material replacements as didn't have all needed for this pattern. Size #9.

Grassy_Knollington said:
This month our theme has been suggested by our very own AlanT
Click to expand...

I know my memory is getting bad but was it? :wow:
G

AlanT said:
I know my memory is getting bad but was it? :wow:
Click to expand...

No, on looking properly it was Torrish. The reason I made such a grievous error was that I was in a hurry and just looked down the inbox to see who emailed last on the subject of TOTM. That was you,,,, but on a totally different subject, I’d forgotten somebody’s picture or similar.

My entry this month is the executioner,I've had salmon and sea trout on this pattern

Grassy_Knollington said:
No, on looking properly it was Torrish. The reason I made such a grievous error was that I was in a hurry and just looked down the inbox to see who emailed last on the subject of TOTM. That was you,,,, but on a totally different subject, I’d forgotten somebody’s picture or similar.

Only pulling your leg, it could quite easily have been me as I'm prone to getting ebay parcels that I can't remember ordering especially after a sesh. . ..
G

AlanT said:
Only pulling your leg, it could quite easily have been me as I'm prone to getting ebay parcels that I can't remember ordering especially after a sesh. . ..
Click to expand...

Nae worries Alan, no offence taken at all, thanks for letting me know.

Grand little fly for both salmon and sea trout last thing at night.

does a worm count?
D

I'll put in a Dunkeld. I seem to catch sea trout mostly when using a silver stoat or using a red frances. One isn't terribly exciting (but a great fly) and the other doesn't feel like a sea trout fly! So I'll go for a pattern I want to try that is supposed to be good for both (I always like a bit of blue in a fly) - I don't catch much so - doubling up on an outcome is fine by me

This is my 'modern' interpretation - given you either see old-style or trout flies - so just made a mix.

Hook - Patriot 10
Tag: Gold oval
Tail: Golden Pheasant crest (it's actually 2 feathers - one longer overlaid with one shorter)
Body: 'Antique Gold' - think Essential fly or funky fly?
Rib/Palmered Hackle : Gold wire - counter wound from head to tag over a partially stripped orange cock hackle (ie. The hackle is tied in at the front - is a full hackle - given 2 wraps - then only one side of hackle palmers the body)
Throat: Guinea fowl with a splash of Jay
Wing: Bronze Mallard
JC
Head Black - Veniards/Sally HAN

​
Ive gone for the trusted cascade, as I've said in previous posts this fly is mostly used on my river firstly for the seatrout run and later on for the salmon runs! Tied on a size 12 double
S

Was gonna tie a pearly stoat, but the pull of blue in a shrimp pattern meant I ended up with this!...

Heading to Labrador on the 3rd for 3 weeks. Filling in a few holes in my boxes.

Red Stoat on single and double patriots. New variant to me, found it on a Welsh youtube channel, and supposedly caught a lot of sea trout and salmon so fingers crossed?

Haven't tried nor tied one yet, but it seemed like a good choice with the usual suspects being taken.

Great flies as usual gents, looking forward to tying my own when I get the chance.

Canewizard said:
Haven't tried nor tied one yet, but it seemed like a good choice with the usual suspects being taken.

Fished this fly on the Laerdal in Sweden and it does the business.

Nothing difficult about tying this pattern but one that's absolutely deadly for both salmon and sea trout.

How not a silver Stoat Tail? What about a regular Stoat Tail then that doesn't use Stoat Tail and is one of my all-time favourites for Salmon and Sea Trout in the summer?

Ade said:
How not a silver Stoat Tail? What about a regular Stoat Tail then that doesn't use Stoat Tail and is one of my all-time favourites for Salmon and Sea Trout in the summer?

Get it entered Ade!

After a very busy month this is the first time ive been able to tie a fly.
So here it is; this is a type of elver that I tie for grilse and sea trout just above the tidal pools. Great with a big downstream mend and allowed to skite across the front of their noses. The eyes may not be to everyones liking but give it a try.

Extra time in every sense of the word.
G

Hi everyone, the Poll is up and the entrants are summarised on the first post of the thread.

As usual, great tying from everyone, interesting and tidy - which is great. Personally, I'm torn between voting for any one of 3 of them and I'd give them all a swim.

Thanks for the entries and get your votes in please.

Any more votes out there? Only 28 so far, the Poll will be open until tomorrow.

If you haven’t voted then please take the time to look through the entries on Post 1 of the thread and cast your vote.