Had a few run in's with some coo's bet never with a bull (thank god !)

Kept on walking for a bit then looked up to see the beast a few metres away from me & it looked pretty pissed off !

Never been so scared in all my life i was shakin like a leaf & chain smoked about 100 fags afterwards.. i now stay well clear of them
F

It has been a while since anyone posted in this thread. Some of the posts on here are hilarious and its by far my favourite thread on the forum. I wonder if anyone else has any bull encounter stories since the last post in 2013.
O

That's a great thread alright most of it concurs with my experience. The story about the bullock crossing the river reminds me of a time years ago when I was about 15 fishing the Quoile river in county Down a good few miles above Inch abbey where its still a decent sized river. I was fishing way when thundering hooves from across the river caught my attention a big lump of a Friesian bull came charging down to the river where he stopped and started pawing a bellowing. Now this boy looked like a bad un he had ring in his nose and chain attached which I already new to be an indicator of bad character. Well I thought he'll below for a while and get fed up. I legged it when he was a third of the way across and up to his chest!

I didnt realise cows would cross a river untill last year. I was fishing the pauperhaugh section of the coquet and the cows had shown an intrest (not big scary bulls but could have been cows or bullocks) as i fished down i noticed them following me on the far bank, then they started to get into the river as i reached a shallow section with an island. I got back over the fence at that point and went to fish elsewhere as im not keen on cows or horses, terrifying creatures and not to be trusted

Sent from my SM-G965F using Tapatalk
B

Levenlad said:
I take it a few of you will have experienced the terror of hearing a cow cough in the dark for the first time.It sounds like an old man who's been smoking too much.When your in the middle of nowhere and a cow starts to cough....well let's just say it a little out of the ordinary.First time I heard it I nearly sh*t myself...
Click to expand...

Yes that and farting sheep...…
B

I remember a story a farmer, on a farm were I used to shoot telling me about his rather larger Hereford bull getting upset by "rep boy" one morning. I had met "bully" on several occasions and he was like a big cuddly dog but even so, I always kept a fence or a wall between us.
Every morning the farmer used to have to bring his milkers across the lane to the parlour, the locals either avoided the lane at that time or waited patiently whilst they the ladies crossed. One morning, as usual the farmer opened the gate and as there was no traffic about let the girls out. However, just as the girls started crossing "rep boy" in his Sierra came round the bend and wasn't happy finding a load of cows in his way. The story goes that he demanded they be moved and was told he had to wait. He did however keep edging forward nearer and nearer the girls who were getting a little bit agitated. Anyway they had all crossed so he thought and he began to move forward when "bully" started to come out of the gate. Now "bully" was a big lad and wasn't in the mood to wait and was coming across that lane whatever. The story goes that "rep boy" pipped his horn at "bully" to help him on his way and bully took offence..... Well, he very nearly turned the car over and there was a stand off and he made a right mess. It took the farmer and a couple of his lads about 15 minutes to get "bully" in! Rep boy wasn't too happy and threatened to sue and the like. The farmer said carry on if you want and " bully" will see you in court. I bet he had fun explaining that to his boss and the insurance!

Rrrr said:
I was fishing the pauperhaugh section of the coquet
Click to expand... 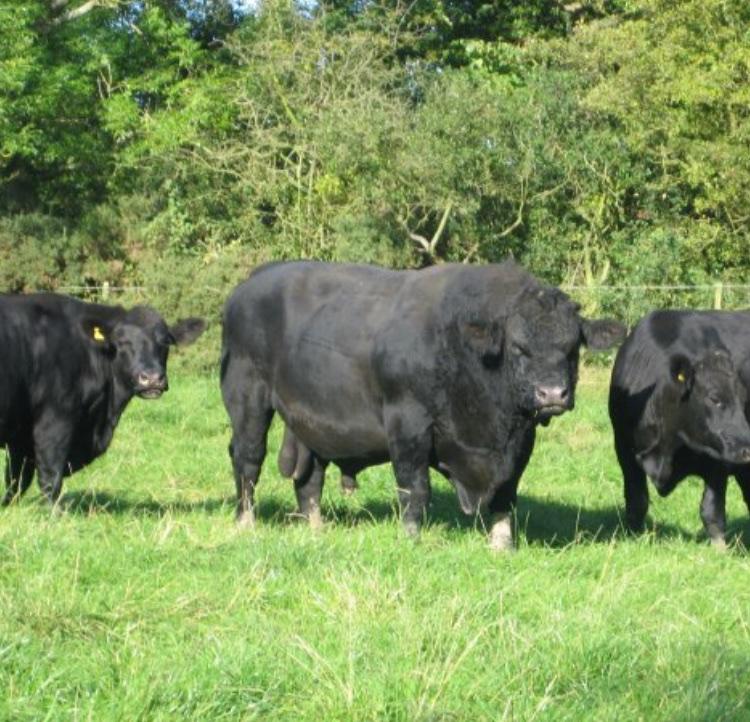 noeyedeer said:
Peter the Angus Bull (in pic above) lives not far from there!
Click to expand...

Sent from my SM-G965F using Tapatalk
A

Anyone who fished a certain stretch of the Teifi above Newcastle Emlyn will know how many fishermen have been forced to jump in the river over bulls. One of the bigger threats right now is cows with calf’s.
Only last month whilst fishing next to a cow that had escaped and was frustrated at being apart from the herd, saw a young man with a small dog and was on him in a shot. Despite me shouting at him to let the dog off the lead he wouldn’t do it. Somehow I managed to get the cows attention but it’s amazing how fast they can run.

I came home tonight to find two my bullock and free Martin heffer in the veg garden , they had put a hole in the poly tunnel and eaten my carrots , parsnips , leeks , swedes and destroyed the Brussels ....Can’t believe they have worked out how to open a gate ! Then spent 10 minutes chasing them around trampling anything else they had left and trying to beat them with a plastic Water pipe to get them out ! Was not happy!

I was at a meeting of fishing club members a few years ago when the subject of what to do when confronted by livestock.
A lady member asked what was the best thing to do when confronted by a bull ?
A very good fishing friend and fellow member , sadly now deceased , leant over and quietly said “ bend over and eat some grass”. It was difficult to contain my laughter .
You must log in or register to reply here.
Share:
Facebook Twitter Reddit Pinterest Tumblr WhatsApp Email Share Link
Top