Just scrolled past someone trying to sell a Bob Church all rounder rod on Facebook. 10'6" rated for 6 to 10wt?!

Anyone able to enlighten me on how these rods work? With such a huge stated rating, I can't really seem to imagine it feels good on both ends of that...

In the early days of carbon rods, wide ratings were not uncommon. As another example, Peter Mackenzie Philps offered a model that was rated 4-9! 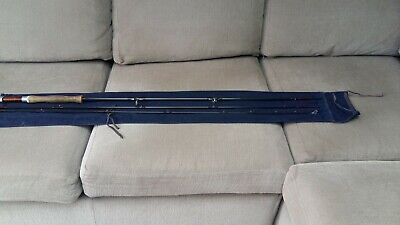 THIS IS A 3 PIECE GRAPHITE FLY ROD IN GOOD CONDITION. ALL THE RELEVANT DETAILS ARE ON THE BUTT SECTION ALTHOUGH THE WORD GRAPHITE HAS BEEN ERSAED. UNUSUALLY IT SEEMS TO HAVE BEEN FITTED WITH AN EXTRA BUTT RING WHICH IS DIFFERENT TO TH REST- POSSIBLY A FUJI ?.
www.ebay.co.uk

One thing to bear in mind is that rods back then were generally much more through-actioned than is the case today, and that sort of rod will work with a wider range of line weights than the tippier actions that are now the norm. At the light end of the scale, they have enough flex to cast a line off the tip, but as the line weight gets heavier the rod simply loads further down the blank.

Also, double taper lines were much more common back then than they are today, and they are rather more flexible than weight forward lines in terms of how much you can aerialise. WF lines effectively have a single loading point which dictates how much you can have outside the rod tip, and while you can cast them with less than that out, it's very hard to extend beyond that point. I can't remember the details now, but I think you only need to put a few more feet outside the rod tip for the load to equate to going up a line size. So the flexibility of a DT line allows you to aerialise more or less line to suit the particular circumstances, and this in turn allows you to use a range of line weights.

Even so, it's hard to imagine that such a rod could ever cover the full claimed range of line weights well; moreover the sort of applications that call for a 4wt are so different than those for a 9wt that I wonder whether anyone would really want to use the same rod for both.

Thanks for the reply, that is truly an odd combo... For those days when you want to have the morning on dries for wee trout, but then spend the afternoon after pike? Maybe it was marketed to anglers' wives as a "He'll never buy another rod now"

only started fly fishing last year, so never had a go on one.
I