Last week FishPal travelled to the Queen of Scottish Rivers to present the FishPal Malloch Trophy for the largest salmon caught and released by an angler in Scotland during 2016. 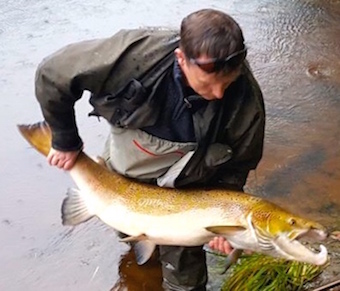 John MacIsaac and his Malloch Trophy winning Atlantic salmon estimated at 38-41lb.Craig Sommerville from Tweedia filmed John MacIsaac explaining how he caught his cock salmon estimated at 38-41lb and the fish of a lifetime caught on the River Spean, a part of the Lochy Catchment, and his thoughts on why we all should encourage more young people to take up fishing.
You can also read more about this superb salmon catch on the FishPal blog.